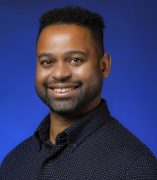 Thomas A. Searles currently serves as an Associate Professor in the Electrical & Computer Engineering at the University of Illinois Chicago, hired under the University of Illinois System Distinguished Faculty Recruitment Program.  This past year (20-21), he was a Martin Luther King Visiting Professor at MIT and served as the Director of the IBM-HBCU Quantum Center.  Thomas received his Ph.D. in Applied Physics from Rice University in 2011, where his thesis work primarily focused on the magneto-optical properties of carbon nanotubes. Upon his appointment at Howard University in the Fall of 2015,  Thomas has established a new research program in applied and materials physics, which now focuses on quantum materials, metamaterials and quantum information science and engineering at UIC.  In recognition for his research in light-matter interactions and his capability to train and mentor Black students in Physics and Engineering, Thomas was recently awarded the inaugural AIP-NSBP Joseph A. Johnson Award for Excellence and an NSF CAREER Award.   Thomas graduated from Morehouse College with a B.S. in Mathematics and Physics. He is a native of Albany, GA.