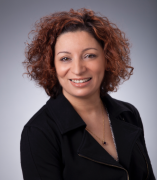 Department of Electrical and Computer Engineering

Besma Smida is an Associate Professor of Electrical and Computer Engineering at University of Illinois at Chicago. After completing her appointment as a Postdoc and later a Lecturer at Harvard University, she became an Assistant Professor of Electrical and Computer Engineering at Purdue University Calumet. Additionally, she was a Research Engineer in the Technology Evolution and Standards group of Microcell, Inc. (now Rogers Wireless), Montreal, Canada. Dr. Smida took part in wireless normalization committees (3GPP, T1P1). She obtained the Ph. D. and M. Sc. from the University of Quebec (INRS), Montreal, Canada.
She is an associate Editor for the IEEE Communication letters and member of the IEEE ComSoc Emerging Technologies Committee. She was awarded the INSIGHT Into Diversity Magazine's 2015 "100 Inspiring Women in STEM".
She received the Academic Gold Medal of the Governor General of Canada in 2007 and the NSF CAREER award in 2015. Her research focuses on wireless communication theory, full-duplex communication, radar, and backscatter modulation.